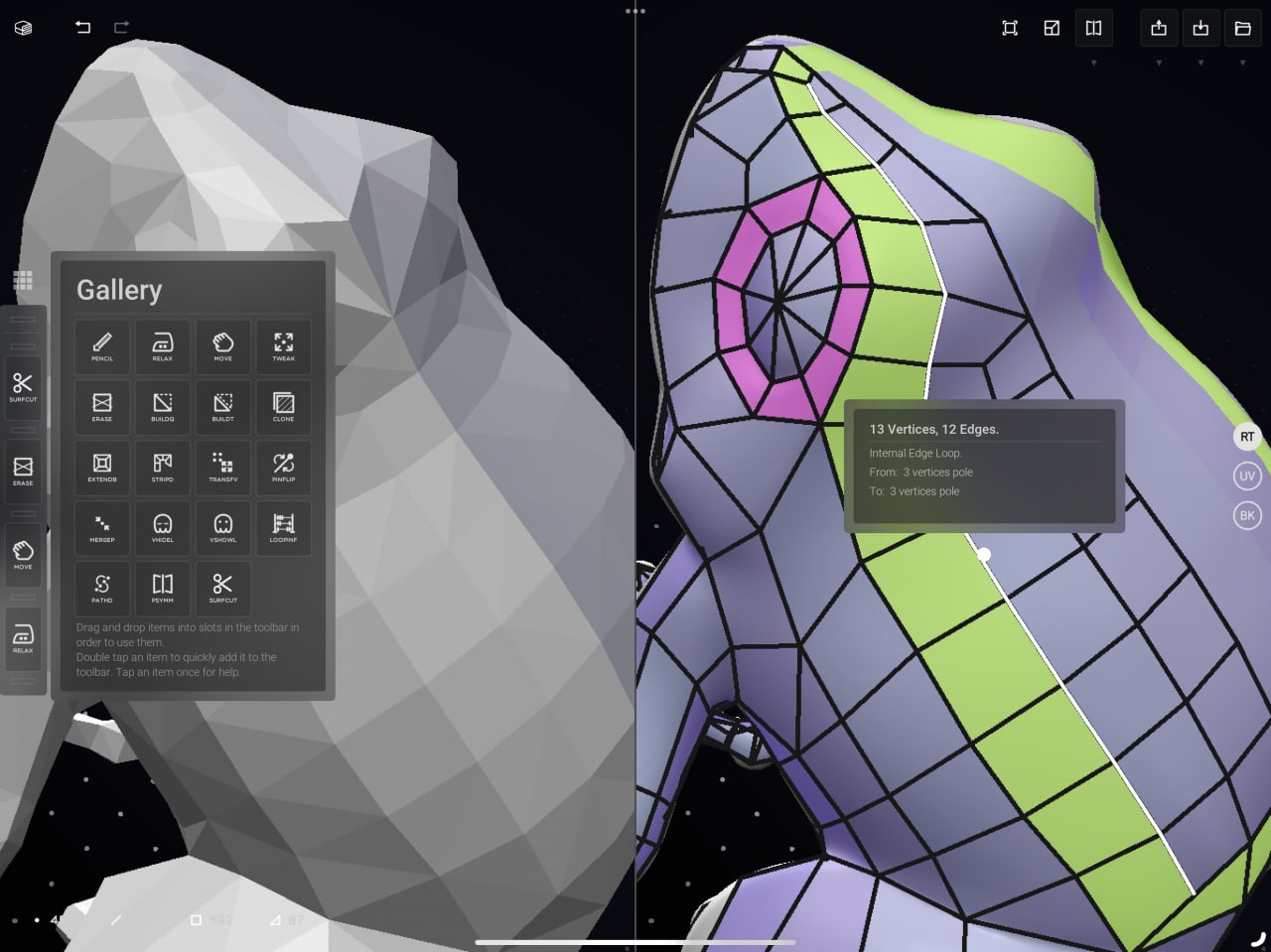 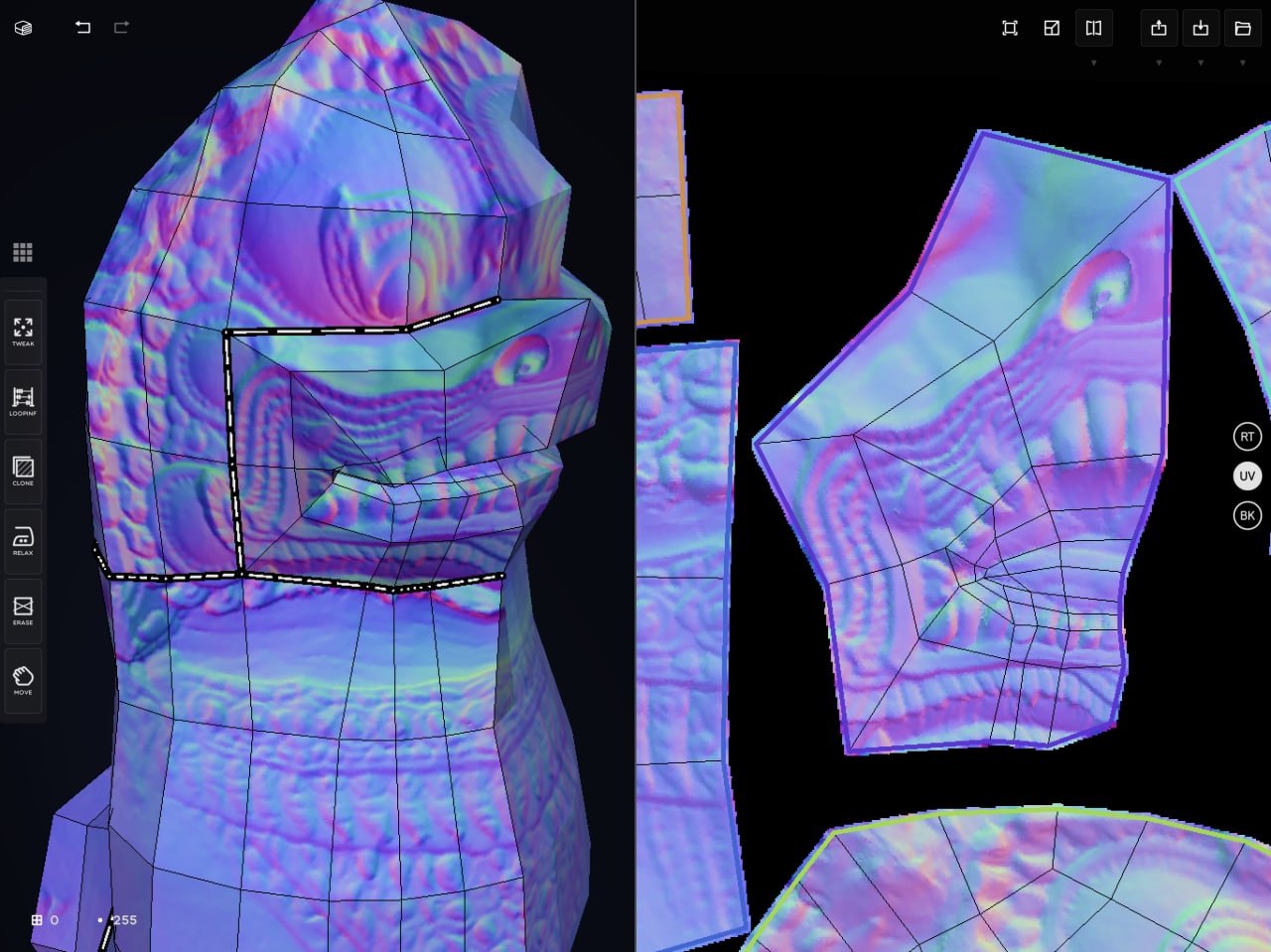 This is an overview of the features and changes we included in CozyBlanket 2.

CozyBlanket 2 includes manual retopology, UV unwrapping, packing and baking. We wanted to create an App that allows preparing models for animation, video games, real-time rendering and surfacing, all with a unified user experience and seamless transitions between tasks.

The Retopology stage is a direct continuation of the CozyBlanket 1 version series. We overhauled the viewport rendering for better contrast and readability. Wireframe drawing is now GPU accelerated and includes new animations. The target mesh can now be rendered with smooth shading and with vertex colors, imported both from .obj vertex colors or ZBrush polypaint.

CozyBlanket 2 has support for multiple viewports that you can create and dismiss using Pencil gesture or by tapping the Stage selection buttons. These viewports show different views of the data you are currently working with. In the Retopolgy stage, you can now see a semi transparent retopology overlay and a shaded preview of the retopology mesh. This is helpful when checking the low poly model shapes and readability while you build the new mesh.

The partial visibility system now can isolate individual components of the EditMesh and Target mesh by holding one finger on top of them. This makes easier working on high poly models composed of multiple objects.

We also included new features for the Retopology Pencil gestures and actions:

There is a new SurfCut action that allows creating arbitrary cuts on the Editmesh, which is available as a Gesture or as a dedicated action in the Gallery.

ExtendB can now reshape the locked boundary vertices by drawing a new line with the Pencil.

We updated the Move action, which now calculates its falloff through the mesh surface, allowing for more precise manipulation of overlapping geometry.

There is a new PathD action and gesture for repositioning a set of vertices into a straight line.

When using Tweak or Build actions, Editmesh vertices can be snapped to the Target mesh vertices by holding an extra finger over the viewport.

We included initial support for pencil hover overlays for the new M2 iPad Pro, which is available in the Relax, Move and Build actions.

After creating an Editmesh in the Retopology stage, you can manually unwrap it in the UV stage.

You can draw, delete and extend UV seams by drawing over the mesh edges in the 3D viewport. Islands are recalculated automatically and assigned different colors after each cut.

Actions and gestures are consistent between stages. For example, you can use Move, Relax or Tweak in the UV stage for modifying the UV coordinates instead of the mesh topology. You can see an overview of all different behaviors of each action and their stage compatibility in the Gallery.

The UV stage supports multitouch texture repositioning when using the Tweak action. You can load a tillable texture and quickly adjust how it wraps over the model without dealing with a 2D UV view.

If you are working with triangulated models with no defined edge loops for seam cutting, you can use the MergeP action to directly paint islands over the mesh.

You can unwrap individual islands by drawing an X shape over them. For unwrapping and packing the entire model, you can draw an X shape over an empty viewport area. Unwrapping, packing and uniforming the scale of the UV islands can also be performed independently.

When using multi viewport, the UV stage shows a 2D view of the UV coordinates. In this viewport, you can further tweak the shape and packing of the UV islands.

As with any other CozyBlanket stage, actions like Relax, Move, Tweak, visibility actions and pins also work with UV coordinates and behave the same way as in the Retopology stage.

Given how the Relax tool was designed, it can also be used for straightening UVs.

When editing the UV island packing, the Tweak action has an expanded set of functionality. It can move, rotate, scale and distribute islands, all including snapping. It can also perform these transformations to individual vertices or to all visible islands.

We also included a set of functionality for dealing with more complex UV layouts, such as support for automatically straighten UV grids, copying UVs from one island to another and automatically symmetrizing and unfolding UV islands. 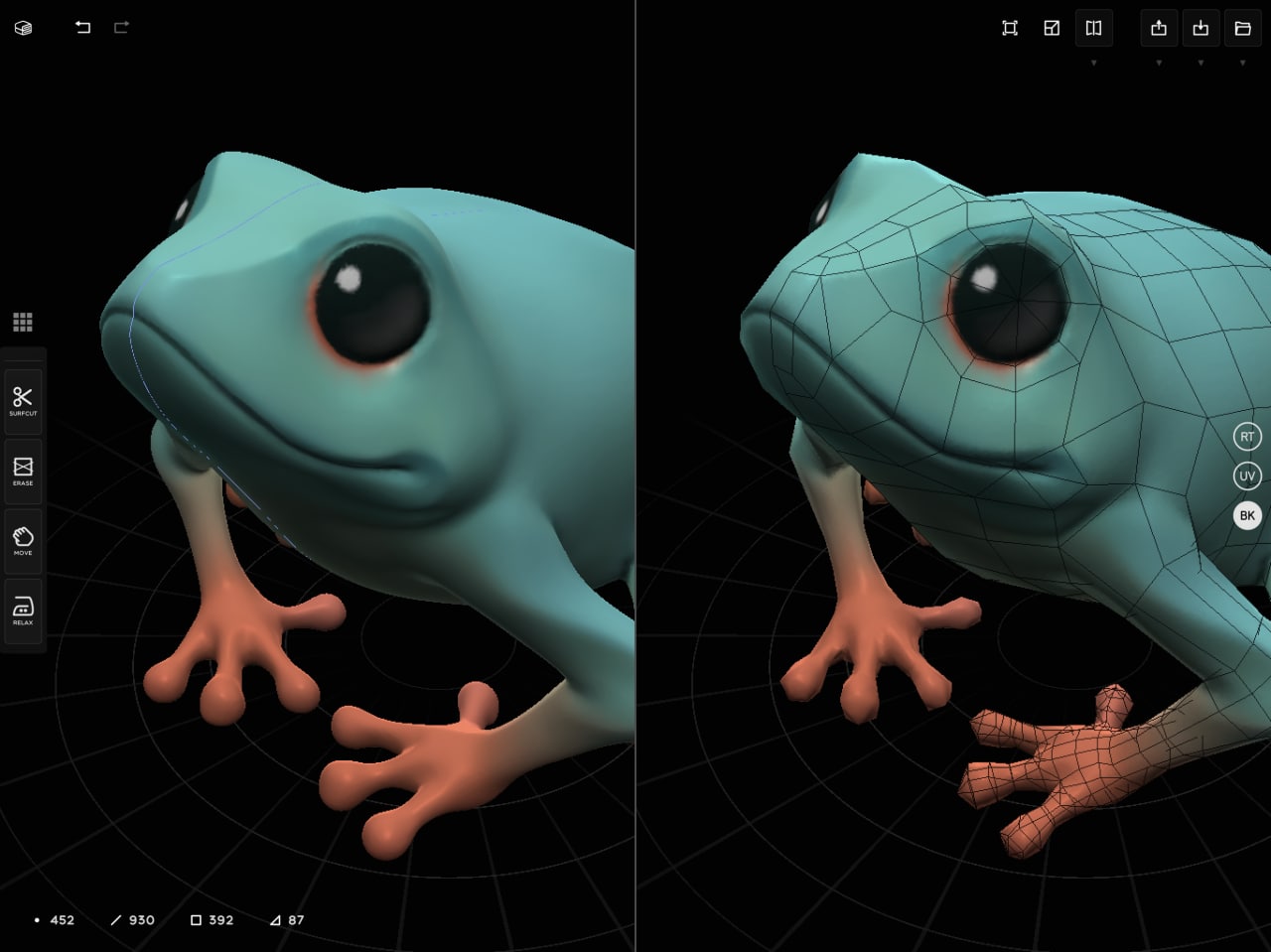 You can bake the entire model by drawing an X over an empty area of the viewport and export the resulting maps with the Export popover. We also included the option to export a zip file including baked maps, the model and mtl file ready to import into another software.

When using multi viewport, you can see the imported target mesh and low poly baking version side by side. You can also move the scene light with the move action to check for possible shading and projection artifacts.

We added feature for fine tuning the baking process to allow great results even with complex geometry.

Finally, we updated the Python network API for pulling the entire model, including textures and UVs to a desktop software. The provided Python module was designed for making as easy as possible to integrate CozyBlanket with any existing 3D editing software or game engine. We provide an addon that integrates this functionality into Blender.